Contrary to what others say, there is such a thing as too young to do karate, or to do martial arts in general. Girls mature faster than boys and are more focused at a younger age so i accept female students as young as 5. Boys are a little slower when it comes to these things at this age so i only accept 7 years and up, except when the child has shown sufficient maturity and focus at a younger age but no younger than 6. 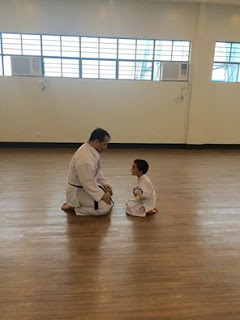 Karate is technically a martial art. It is a sport only to a certain degree but ultimately, it is a martial art. As such, it is dangerous to learn and know. A child lacking in maturity could not grasp that. He or she might treat it like a game and end up hurting themselves or others. As much as it would be irresponsible for an adult to give a knife to a 4 year old, it would also be irresponsible for us to teach karate at that age.

In a group class, there is only so much time a teacher can allocate for each group of students. If a child does not listen or needs repeated calls to catch his attention, then it will eat up time and the other students will suffer. Here is where focus comes in. Also, if a child is focused enough to listen well and understand, then he or she will progress faster. Good teachers want the students to learn not just be there and pay tuition fees.

Age involves also the ability of a child to know his/her left and right limbs which is important in the teaching of karate. Age also brings the ability to understand the concepts involved in this martial art. Gone are the days when kids are just supposed to watch and copy. If they understand how things are done and why, then we build better martial artists. Of course, the responsibility of the teacher is to be able to share and explain these concepts. If a teacher can't explain then you or your child might be better of learning wax on and wax off from Mister Miyagi.

The best way is for a child to get good exercise from sports like swimming. When they reach the right age, they can then join a karate class. This will produce good martial artists who truly learn the art and not just mimic what their teachers do.
Posted by Super at 5:30 AM